Xerath, the Magus Ascendant, is the newest addition to the League of Legends support pool. With a 50.52% win rate and a 4.86% play rate, Xerath uses his strong laning phase to take over the game and become a full-blown carry. Let’s see how you can use Xerath to break open your Solo Queue games!

How to use: Xerath’s passive is great for solving his mana problems. Granted, Mana Surge is most effective when used on champions, but you can still get a lot of value from it when hitting minions. The passive comes up every 12 seconds, so just use it on cooldown.

First cast: Xerath channels magic energy for 3 seconds, gradually increasing Arcanopulse’s range over 1.5 seconds. The Magus Ascendant is slowed during this time, and he can’t auto attack or use other abilities without interrupting the channeling.

Second cast: After a brief delay, Xerath fires a surge of energy in the target direction, dealing damage to all enemies hit. If Xerath doesn’t reactivate the ability within the 3-second window, Arcanopulse gets canceled, and half of its mana cost is refunded.

How to Use: This is your bread and butter. Arcanopulse has a very long range, and the skill shot passes through minions, making it incredibly oppressive in the bottom lane. If you time it right, you can chunk out the enemy marksman without engaging him in direct combat. And once he’s low enough, you can seal the deal with other abilities.

Xerath launches a blast of magical energy upon the target area. The blast strikes after a brief delay, dealing damage to all enemies hit and slowing them by 25% for 2.5 seconds. Enemies caught in the center of the explosion take increased damage and are affected by a stronger slow.

How to use: Eye of Destruction’s damage is nice and all, but the real kicker is the slow. Xerath’s abilities are hard to connect, so slowing your target before initiating an all-in is a nice way to circumvent this weakness. Of course, your enemies will attempt to dodge, so take advantage of their movement patterns and positioning mistakes.

Xerath throws a magical orb in the target direction, dealing damage and stunning the first enemy hit. The stun lasts for 0.5-2 seconds, depending on distance traveled.

How to use: Shocking Orb is your only form of crowd control. It has a long range, but the projectile itself is so slow that your enemies will have no issues dodging it. That’s why you should hold on to it until you land Eye of Destruction [W] or see someone making a misstep. Shocking Orb can also act as a decent disengage tool. See an Alistar or a Leona walking at you in a straight line? Throw out your stun to de-escalate the situation.

R: Rite of the Arcane

Xerath immobilizes himself for up to 10 seconds, gaining the ability to cast Arcane Barrage, but losing the ability to cast his other spells. Every time Xerath reactivates his ultimate, he sends a blast of magical energy to the target location. The projectile lands after a brief delay, dealing damage to all enemies in the area.

Rite of Arcane can be canceled by moving or auto attacking. If the spell ends without Xerath using a single cast of Arcane Barrage, half of its cooldown is refunded. If Xerath is affected by hard crowd control, the ability is canceled and put on full cooldown.

How to use: Rite of the Arcane is your finishing move. Use it to kill wounded enemies and catch out stragglers. The range on it is quite long, so you can use it in teamfights even if you’re on the other side of the map. Keep in mind that your ultimate roots you in place, and many champions will try to take advantage of that.

Arcanopulse [Q] is the strongest spell in Xerath’s arsenal, so always max it first. Follow up with Eye of Destruction [W] for its slow and decent damage scaling. Save Shocking Orb [E] for last. It doesn’t hit as hard as your other basic abilities, and the stun remains the same no matter how many points you invest in the spell. Level up Rite of the Arcane [R] when possible.

Xerath is a mage support that works best with Sorcery runes. For your keystone, pick Arcane Comet. Even though people can dodge it, it will still hit often enough to outperform something like Aery. Your next rune has to be Manaflow Band because Xerath often has mana issues. Also, grab Celerity to have a better chance of dodging enemy skill shots and moving in range to connect your abilities.  Pick up Scorch last to make your poke stick in the laning phase.

Your second rune path is Inspiration. Magical Footwear is great for saving gold and getting some extra movement speed in the mid game, and Cosmic Insight synergizes well with your spell-focused kit. That being said, consider taking Biscuit Delivery or Perfect Timing if you have a tough laning phase.

Since Xerath is a squishy and immobile champion, you always want Flash as one of your summoner spells. Your next summoner should be Exhaust if you’re playing against a duo with a lot of kill pressure or Ignite if you’re feeling good about your lane. As you can see, the only actual support item in Xerath’s build is Sightstone. Or, rather, Eye of the Watcher. It provides some vision control to your team while offering a great mix of AP, CDR, and mana regen. Sorcerer’s Shoes are also great since you’ll often be sniping people from afar and making full use of the magic penetration.

Meanwhile, Morellonomicon solves your mana problems and throws in AP and CDR on top of that, and Linadry’s Torment is another magic pen item that makes your spells sting. Get Luden’s Echo next to add more burst to your all-ins. And don’t forget about Void Staff in case you need to deal with magic resistance.

Keep in mind that even though we’ve listed 6 items in our build, it’s often better to leave one slot open for Control Wards. Sure, you’ll be missing out on some DPS. But the benefits of securing vision control around key objectives far outweigh any damage bumps.

Xerath has several situational items you want to consider. If you’ve already gotten a few kills and feel like you’re crushing the enemy bot lane, pick up Mejai’s Soulstealer. You can avoid dying by staying in the back, so it should be relatively simple to accumulate more stacks.

Frost Queen’s Claim is another great purchase. Of course, it delays your Sightstone upgrade, but its slowing active makes it much easier to connect your abilities. Then we have Rylai’s Crystal Scepter. Even though its slow doesn’t synergize with anything other than Arcanopulse [Q] and Rite of the Arcane [R], it can still do a lot of work in teamfights and skirmishes. Finally, Zhonya’s Hourglass is invaluable when you’re facing assassins and strong initiators.

When to pick Xerath?

Even though Xerath is a strong laner, you lose a lot of utility by picking him. That’s why you want to get that utility elsewhere. Make sure you have a decent frontline that can protect you while you’re channeling your abilities. Also, remember that Xerath excels at sieging, so taking him as a part of a poke comp is always a good idea.

Xerath works best into matchups that don’t have shields or hard engage. In other words, you want to face defensive tanks (Braum, Tahm, Kench) and mages (Zyra, Brand, Vel’Koz). Of course, that doesn’t mean you can only pick Xerath in these scenarios. You can still tear through shields with your spells, and you can certainly poke out squishy initiators like Thresh or Rakan. Even so, avoid picking Xerath into champions like Leona or Alistar because a single misstep will cost you the game.

Just like other mage supports, Xerath wants to start with Spellthief’s Edge. Put a point into Arcanopulse [Q] and walk to your lane. Your goal for the laning phase is to poke as much as possible without engaging in direct combat. The best time to do this is when the enemy AD carry is going in for last-hits, but don’t hesitate to channel your Q if you spot a good opportunity. Sure, they’ll try to juke it, but the hitbox is quite wide, and if you’re decent at reading enemy movement, you will hit your spells more often than not. Also, remember to use your passive to avoid running out of mana.

Grab Shocking Orb [E] at level two. The crowd control will provide quite a bit of kill pressure, so don’t try to force the fight too much. That being said, if you see the enemy duo get into a bad spot, punish them with a well-timed stun. In general, you want to be pushing as much as you can. After all, it’s much harder for the enemy bot lane to avoid your spells when they’re farming under their turret. Of course, this playstyle leaves you vulnerable to ganks, so make sure to keep the river warded.

You get another powerspike at level 3 because you gain access to Eye of Destruction [W]. The ability won’t be as useful when you’re poking from afar, but it will be very handy in all-ins where you need the slow to connect other spells. Keep your distance, though, because the last thing Xerath wants is a full-blown skirmish.

Another powerspike comes at level 6. Even though Rite of the Arcane [R] isn’t that useful during fights, it’s great for finishing people off. So stick to the same hit-and-run pattern of poking, and once you see someone get low enough, secure the kill with your ultimate.

In the mid game, Xerath turns into a long-ranged mage. You still need to provide vision to your team but don’t overextend into the enemy territory if you’re not sure where your opponents are. In general, you want to pick a lane (preferably mid lane), set up a few wards to avoid being flanked, and siege the enemy turret.

Arcanopulse [Q] is perfect for pushing waves and harassing champions while Eye of Destruction [W] and Shocking Orb [E] act as decent disengage. Still, remember that you’re very squishy, so do your best to avoid getting all-ined. This gets much easier with a good frontliner, but if you don’t have anyone to protect you, stick in the back and provide some artillery damage.

Coincidentally, Xerath is great at contesting neutral objectives. If you see the enemy team going for Dragon or Rift Herald, poke them down with your abilities from a safe distance. Hell, you might even be able to steal the objective with Rite of the Arcane [R]. Of course, the other side of the coin is that you turn into a sitting duck when you’re the one doing the objectives, so make sure you have all possible flank routes warded.

Xerath turns into a potent carry in the late game. Your abilities deal a ton of damage, and you can even delete enemy squishies with your full rotation. Also, your ultimate gets 5 charges, making it much easier to snipe wounded opponents.

Since you’re a carry now, your life holds much more importance. Staying safe becomes an even bigger priority, so try to stick with your teammates at all times. If you need to go into the fog of war to ward, ping your teammates for assistance to avoid getting caught out by the enemy team.

In teamfights, your job is zoning and poking. Always aim for the carries since Xerath’s damage isn’t consistent enough to shred through tanks. Meanwhile, if you hit a squishie champion a couple of times, he’ll almost certainly be out of the fight. 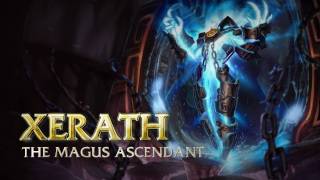 Xerath is the ultimate lane bully. If left unchecked, he takes over the bottom lane and snowballs that lead to the point that he becomes a legitimate carry.  And that’s exactly what you need to find some quick Solo Queue victories.